Invasive, non-native plants and animals are one of the greatest threats to biodiversity and the ecological integrity of our natural areas, and therefore are a focus for FNAI.  There are many groups doing exceptional work related to invasive species, and much of that work in Florida and around the country is coordinated by regional collaborations called Cooperative Invasive Species Management Areas or CISMAS.  CISMAs are volunteer collaborations of professionals, private landowners, and concerned citizens who believe that more can get done when working together.  Participants may work for different private and public organizations with differing job duties and often differing priorities.  However, everyone unites in their efforts to eradicate or control invasive species across fencelines and political boundaries.  Bringing resources together is often a more cost-effective approach to manage the problem.

There are two primary ways in which CISMAs can make a difference.  First, there is direct control of invasive species through scheduled workdays.  Teams will work together to kill invasive plants (hand pulling or treating with herbicide) or do surveys to find out and document where the invasive species may be present.  Second, CISMAs participate in public events to educate the community and local land managers on the problems associated with invasive species.  Many people don’t even know that the invasive species they have in their own yard are causing a problem for conservation lands nearby!

We encourage anyone interested in the conservation of Florida’s biodiversity to become familiar with the CISMA in your area.  To find out who to contact, visit the Florida Invasive Species Partnership (FISP) website.  FISP is the umbrella organization over all of the Florida CISMAs.  FNAI is a key partner in this process; our invasive species contacts actively working with the CISMAs are Gregg Walker and Greg Jubinsky. 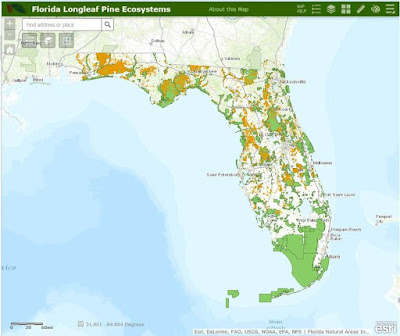 FNAI, in partnership with Florida Forest Service (FFS), has just launched our newest interactive map:  Longleaf Pine Ecosystems in Florida.  The public and our partners can now easily view data contained in the Florida Longleaf Pine Ecosystem Geodatabase (LPEGDB), a central repository for information on the distribution and ecological condition of longleaf pine.

Much of the LPEGDB data is thanks to the dedicated efforts of FFS County Foresters who field assessed almost 850,000 acres of potential longleaf in 8 months!  FNAI helped develop the rapid assessment protocol and trained 40 foresters on its use in the field.  In addition to the rapid assessment, the LPEGDB contains information from many other sources including field data collected by FNAI and our partner agencies like US Forest Service, Eglin Air Force Base, Florida Fish and Wildlife Conservation Commission, and the Water Management Districts.  To date these efforts have confirmed 2.15 million acres of longleaf in the state and we can report ecological conditions on 78% of those areas.

On the interactive map users can toggle Ecological Conditions layers to display summaries of vegetation structure and composition for the canopy, shrub, and ground layers.
Healthy longleaf pine ecosystems are characterized by much more than their iconic trees.  Assessment of vegetation at different levels gives a picture of overall condition and can help guide management and restoration priorities.  In their natural condition, these fire-adapted, open landscapes have one of the highest diversities of flowering plants in North America and are critical habitat to a host of rare animals including gopher tortoises, fox squirrels and red-cockaded woodpeckers.   Land managers often focus on restoring appropriate fire regimes to help restore the natural biodiversity and ecological processes of these communities.

Check out the map and provide feedback.   The map reflects the latest version of the database– LPEGDB v.3— just published in September 2015, and we are pleased to continue our partnership with FFS to update the LPEGDB in 2016.  For latest details on the project and other longleaf links please visit our longleaf webpage.
Posted by FNAI at 8:27 AM No comments:


This summer FNAI staff reviewed the scientific literature and our database to ensure that all species found nowhere in the world but Florida were correctly identified and coded as endemic.  With more than 2,000 endemic species, Florida ranks 4th among US states, behind California, Hawaii, and Texas.  This count includes just full species, if infraspecific taxa, like subspecies or varieties, are included the number rises substantially.

FNAI tracks species that are potential conservation targets based on their rarity, vulnerability, or threats they face.  We track many endemics but there are some species, Polygala rugellii and Quercus inopina for example, which, despite not being found elsewhere, are sufficiently common within Florida that they currently do not require conservation efforts to ensure their continued existence.  The table below lists counts of endemic species by taxonomic group and whether or not FNAI tracks them.

The map below, exported from FNAI’s Biotics data management system, shows occurrence centroids for the endemic species that we track.  Endemic species are concentrated in several areas including the Lake Wales Ridge, the Panhandle, the southeastern part of the state including the Atlantic Ridge and Miami Rockridge, the Keys, and to a lesser extent, the central portions of the East and West Coasts.