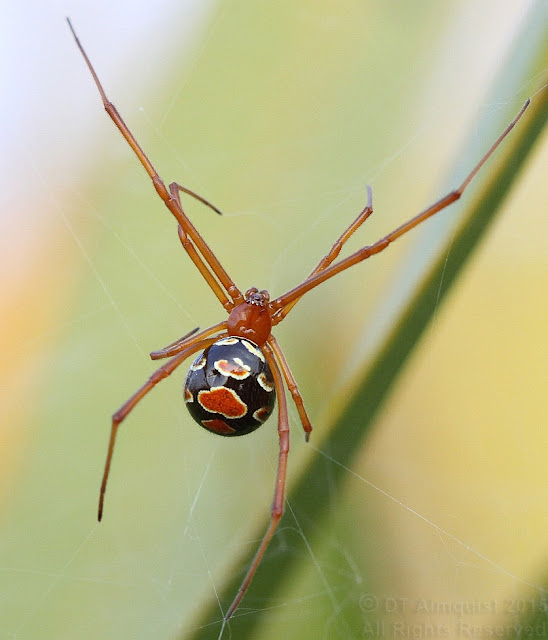 This beautiful specimen posing at The Nature Conservancy's  Disney Wilderness Preserve after being disturbed in her retreat is a female red widow spider (Latrodectus bishopi), a rarely encountered species of spider that is closely related to black widows (L. mactans and L. variolus). Although they are believed to be as venomous as black widows, very few bites and no deaths have ever been attributed to them. Red widow spiders are one of 16 rare spider species tracked by FNAI, and they have a conservation rank of G2G3, meaning that they are imperiled to vulnerable over their entire range. 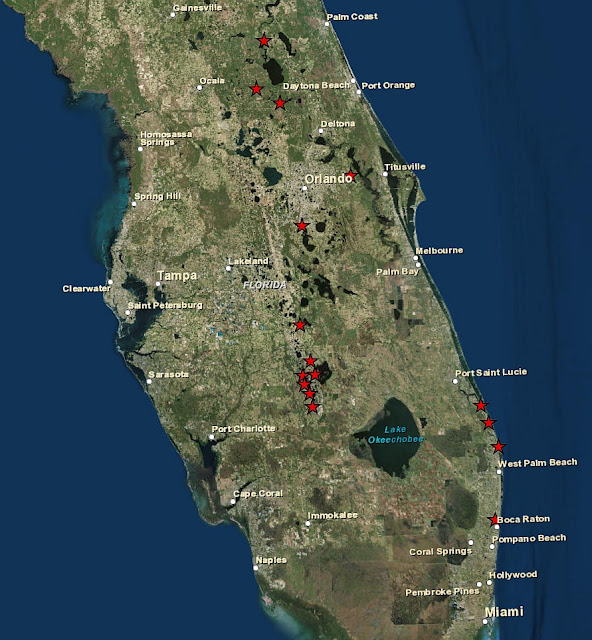 This species is endemic to the Florida peninsula, but even there it is only known from relatively few places (see the red stars on the map above), with almost all populations being on the Lake Wales Ridge and a few on the Atlantic Coastal Ridge. It lives primarily in scrub and scrubby flatwoods habitats, of which much has been destroyed. Remaining areas of appropriate habitat that are not properly protected for conservation purposes are threatened by development and poor management. Red widow populations appeared to be unaffected by fire in at least one study (Carrel 2001), but they very likely receive some "...benefit from fire because they nest almost exclusively in palmettos that are only 1-1.5 m high, the sort that are found naturally only in recently burned scrub" (Carrel pers. comm.). 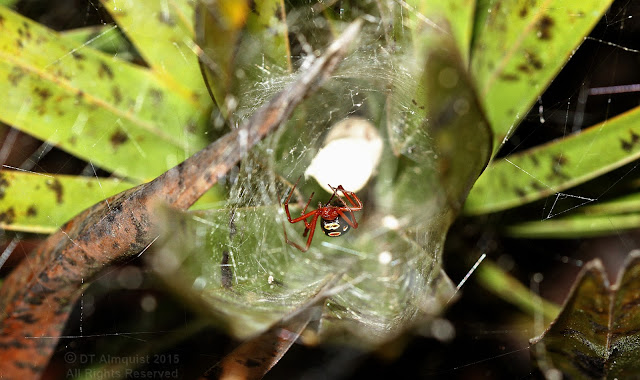 Females construct a very distinctive retreat--where they hide, mate, and guard their eggs--by binding together palmetto leaves with silk. The above female was very protective of her two egg sacs, although not actually aggressive. 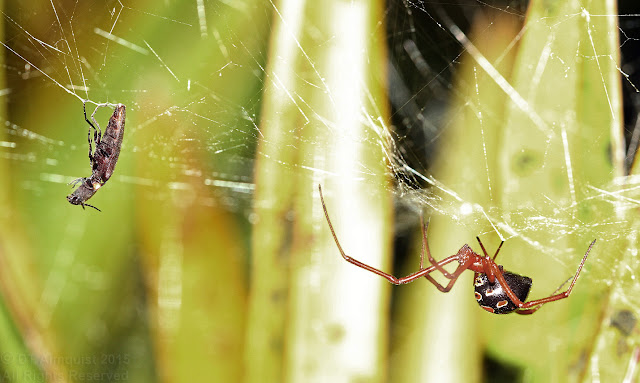 Like many spiders, red widows eat mostly insects and catch them in a web.  One study found that in the spring they feed primarily on nocturnal beetles, such as the above glowing click beetle, Deilelater sp., but that later in the year diurnal bees and wasps become more important as prey items. Overall, five species of endemic scarab beetles, which also live primarily in scrub habitat, make up most of their diet (Deyrup and Carrel 2014). 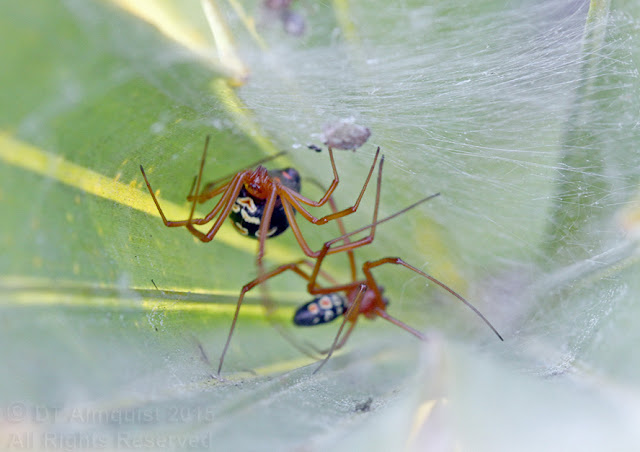 As shown above, the males are smaller and more slender than the female and they usually eat prey that the females capture, although males are capable of capturing their own meal.

Update from the Field: Tracking an Invasive Species

Catclaw mimosa (Mimosa pigra) is an invasive exotic plant from Central America which was introduced into Florida as an ornamental plant in the 1920’s.  It currently grows in isolated areas of Highlands, Martin, Palm Beach, Broward, St. Lucie and Okeechobee Counties.  It is a thorny sprawling shrub which can form thickets if unchecked.   It has invaded hundreds of square miles in Australia and Southeast Asia making invaded lands almost unusable.  Like the native species of mimosa, sometimes referred to as “sensitive plant,” the leaflets fold up when they are touched.  Catclaw mimosa can invade many habitats from dry uplands to the deepest swamps but prefers moist to wet places.  It is a Category I plant on the Florida Exotic Pest Plant Council’s list of invasive species in Florida and on the US Federal Noxious Weed List and considered one of the 100 World’s Worst Invasive Alien Species by the Global Invasive Species Database.  The Florida Fish and Wildlife Conservation Commission Invasive Plant Management Section (FWC-IPMS) and its predecessors have diligently spent the past 36 years treating it to ensure it does not become a widespread problem in Florida.

In March 2015, FNAI scientists were asked by FWC-IPMS to survey more than 7,400 acres of conservation lands in Palm Beach and Martin Counties for this species to guide contractors’ upcoming treatment efforts. During this process, FNAI staff walked approximately 600 miles (almost a million meters!) through a variety of uplands, herbaceous marshes and forested swamps.  The good news is that Mimosa pigra does not appear to have expanded its range too much!