Update from the Field: Harper's Beauty


A tiny yellow beauty is blooming now in the colorful wet prairies of the Apalachicola National Forest.  Harper’s Beauty (Harperocallis flava) is considered critically imperiled globally and listed as endangered at both the state and federal level.  With the exception of one additional population in Bay County, the Apalachicola National Forest is the only place in the world that Harper’s Beauty is found.  The US Forest Service, which manages the forest, tracks the status of the species to ensure its persistence.  Harper’s Beauty is in the Tofieldiaceae Family, the only member of the genus in North America, its nearest relatives in northern South America.  It thrives in wet prairie, a diverse herbaceous wetland, maintained by frequent fire, dominated by grasses, sedges, and wildflowers.  While wet prairie is widespread across Florida, this species appears to occupy a little understood niche within this larger habitat type noted for seepage, plentiful orchids, and carnivorous plants.  An extremely narrow range combined with habitat degradation due to long-term fire exclusion both contributed to the rarity of this species.  FNAI botanists have collaborated with the US Forest Service since 2011 to monitor known populations of Harper’s Beauty, search out new populations, and document habitat conditions where it grows to help prioritize management efforts to both maintain and restore the places where this beauty grows. 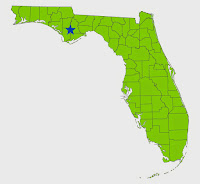 May is the month for monitoring Harper’s Beauty and the FNAI botanists have been busy censusing the 27 populations in the Apalachicola National Forest.  Especially exciting, two new populations of Harper’s Beauty were discovered this month, pushing the range of this species further east than previously known!!